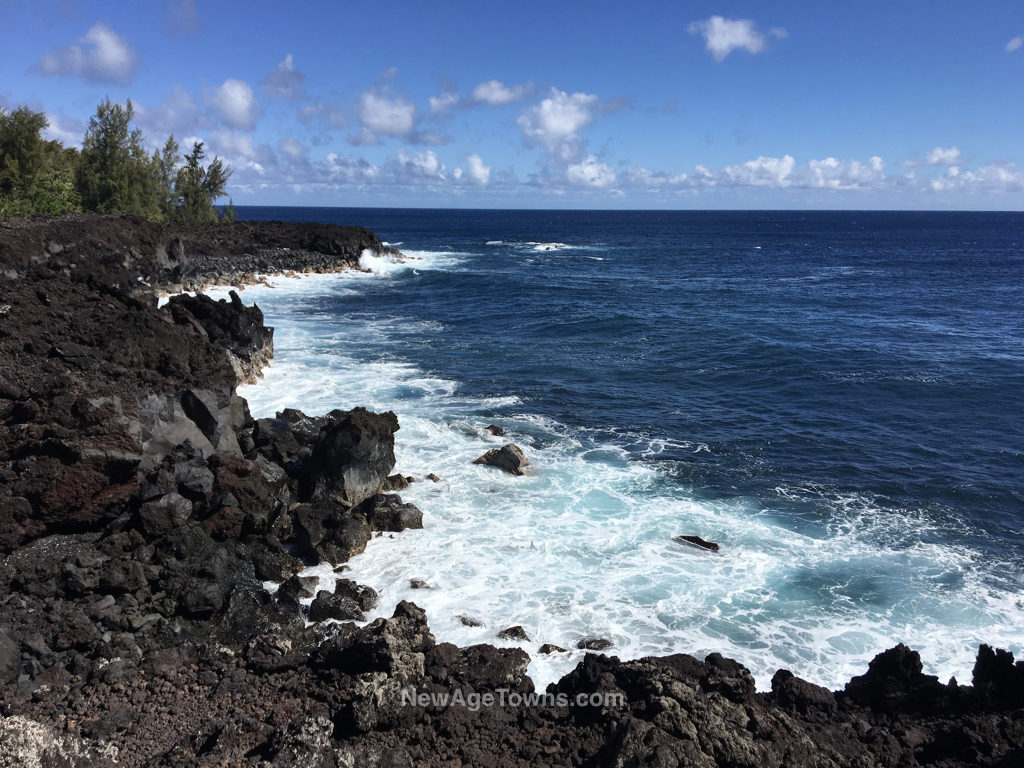 On the way to Kehena Beach, HI

Puna is the eastern most district on the Big Island. It boasts a rugged coastline with black sand beaches, lava cliffs and clear water. There’s enough rain to keep the forest healthy and the permaculture vibrant. What was amazing to us was the feeling of the area near the water. It was clean and open and fresh. It feels like new rainforest.

The prices in the district are more affordable than most other parts of the island. However, there is a reason for its relative financial accessibility — the region could all be wiped away and there’s nothing anyone can do about it. 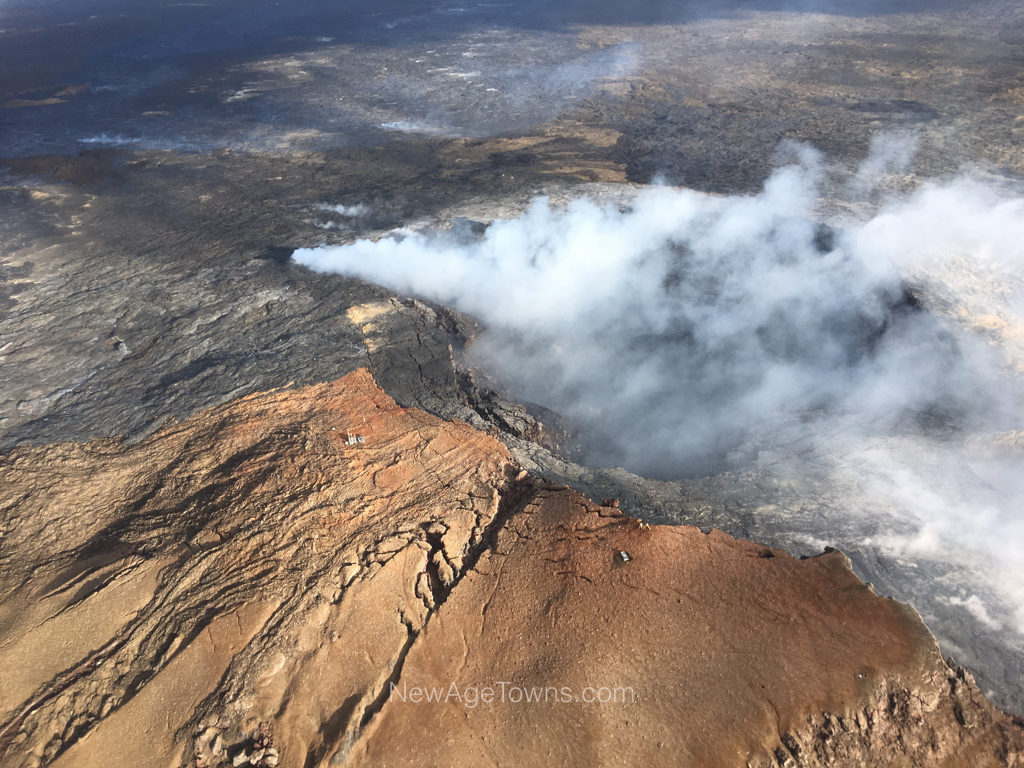 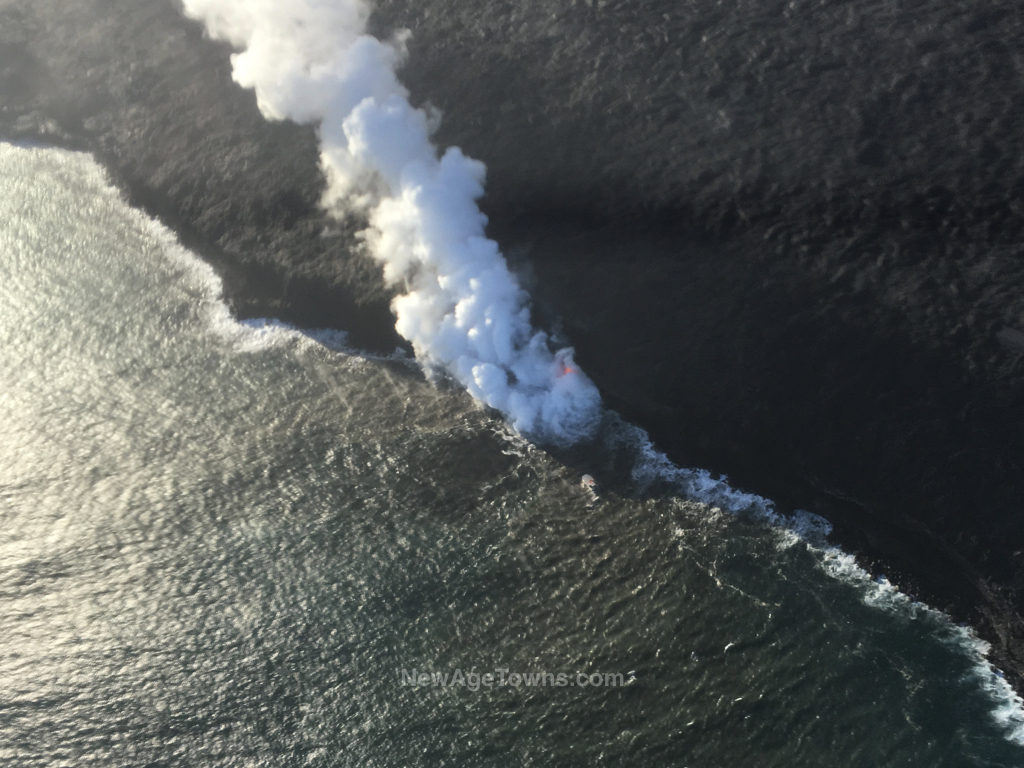 Puna is at the mercy of Kilauea, the lava-spewing volcano that is stunning to see but can be devastating to plants and property. Even a steel wall won’t stop molten rock. So you suck it up and enjoy it while you can. 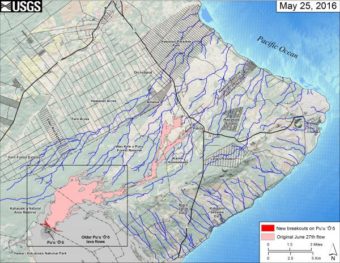 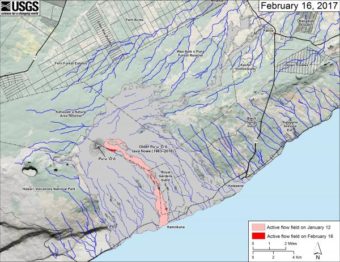 In 2016, as shown in the top map, lava flow neared Pahoa, the main town in the district. But the flow stopped just short of a school, shifted direction about 90 degrees and is now (Spring 2017) flowing into the sea. (Map #2) More land is being created daily as the fountain of molten rock spills into the ocean.

But no one expects the flow to stay where it is for too long. There are tubes and valleys and weak spots and hot spots all through the area. The lava always shifts.

Because of the risk, in some areas of the district, property insurance became unavailable. Home values dropped precipitously. The opportunistic grabbed it and built semi-permanent retreats or cabins. These may last 50 or 100 years. or in the next ten they may be gone, or at least cut off from civilization. (For now, as we understand it, insurance is available and home values have recovered.)

If you feel like touristing a bit, and spending some money, we highly recommend a doors-off helicopter ride over the volcano. On our trip, we circled the crater both clockwise and counter-clockwise so that both sides could get a good view. With the doors off, and the helicopter turning, you get a straight down view. It’s awesome, and it’s how we got the pictures above.

The town of Hilo lies just outside the Puna border, but it is the largest city on the east side so we’re mentioning it. And it’s wet, perhaps the wettest town in Hawaii. Check a random weather satellite and zoom down. Odds are good you’ll see a little rainy patch over the eastern portion of the island. Beneath that patch will be Hilo. 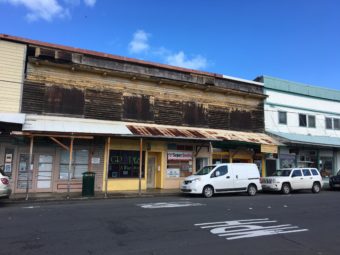 Kona, on the upper west side, has the nice weather. The rain there tends to stay 500 feet or so up the mountain, leaving the beaches relatively dry. It’s good for the coffee, that really does grow all over the mountainside, and it’s also good for the tourism.

But Hilo does have a few cool restaurants, a chocolatier who makes his chocolate in small batches in his shop, and a full time farmers market.

Plumbing and electric lines are not good long term investments within miles of an active volcano. Roads that were recently completed have since been destroyed by lava. Everything is a risk of melting. So power and water become the responsibilities of property owners. What this means is that some of the conveniences we expect in modern retreats are not available in Puna. This creates a closer connection to the earth and more of an outdoor living environment. If that’s not for you, you can always head up the coast to Kona and hang with the cruise ship visitors. That’s where Seiji’s Sushi is, our favorite Hawaiian sushi place.

Hawaii is one of the few places in the U.S. where naturopathic medicine and alternative healing have strong representation. The overall mentality of the islands, large number of organic farms and a strong connection to both the land and the sea promote an affinity for non-traditional healing. Beyond the local Reiki masters and chakra healers, there are dedicate healing retreats. We’ve listed a couple for reference.

Kokolulu Farm and Cancer Retreats [LINK] Located in Hawi, all the way around the island.

Monsanto, GMO and a Bit of Irony

Not all is pure in Hawaii. In November of 2014, Maui county passed an initiative to put a moratorium on GMO farming.The initiative included the islands of Maui, Molokai and Lanai. In a strongly democratic state with a strong environmental slant, the vote passed by approximately 23,000 to 22,000. This was a big blow to Monsanto. In an article published on Grist, Nathaniel Johnson quoted Monsanto as saying: “The majority of the corn seed we sell to farmers in Argentina, Brazil and the U.S. has originated from Monsanto’s Maui operations.”

However, the local laws did not stick for they narrowed state laws. As reported by Honolulu Civil Beat LINK] The San Francisco based 9th Circuit Court of Appeals decided that the local laws were not enforceable and that the more lax state laws would hold. Win for Monsanto, GMO, undisclosed pesticide treatments and limited buffer zones. Lose for local control over the health of its citizens.