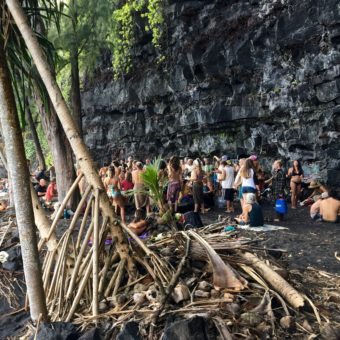 We’re fans of drums. The Venice Beach drum circle on Sunday afternoons is one of the largest regular circles we’ve seen. The Kehena Beach circle is smaller, but much freer. One of the reasons is because of seclusion. In order to reach Kehena Beach, you have to walk down a path from above. Not only that, but the beach is a cove, with lava outcroppings on both side. In other words, the drum circle at Kehena Beach is a destination, not something you happen upon on a Sunday stroll along the strand.

The beach is a small and black on a tiny bay with some pretty rough water. The circle itself is just off the beach, up near the base of the lava cliff.  The acoustics are good, and the amphitheater effect makes it feel even more intimate.

Attire requirements are flexible. It’s about music and togetherness and the ocean.We just so happened to forgot our swim suits. Or maybe the subconscious was at work helping us let go. Regardless, if you get the chance to swim in the ocean, sans suit, we highly recommend it. 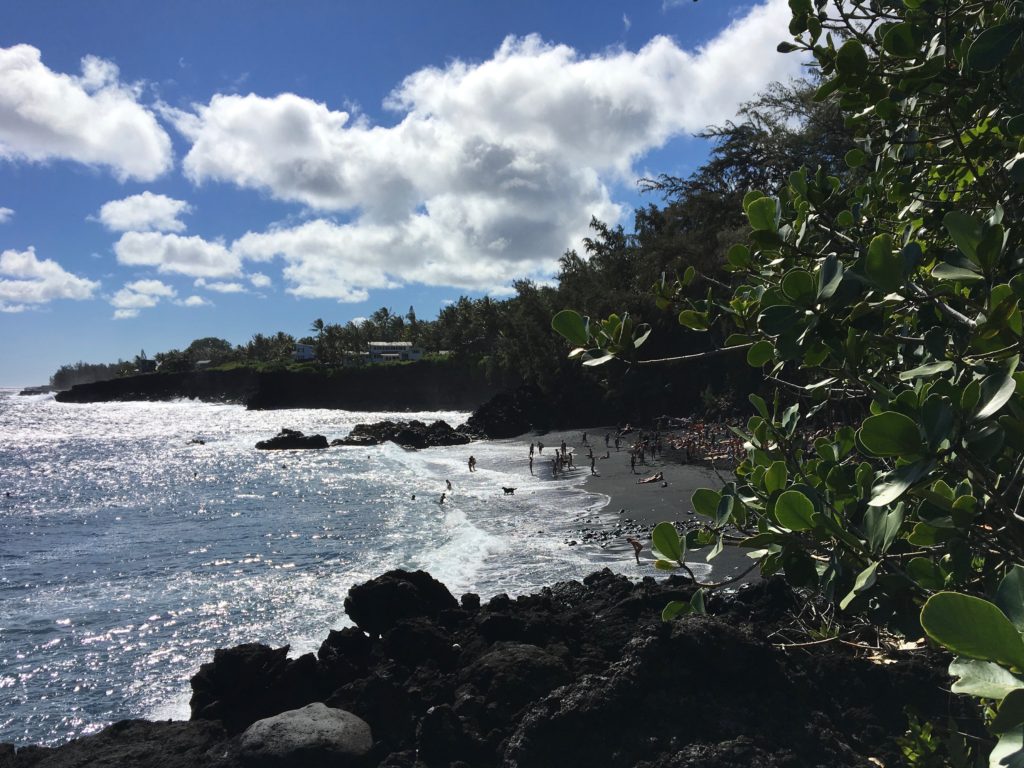 Kehena Beach – Down to the Drum Circle

At least according to our day, there is a center. And it starts with ecstatic dance. Not necessarily because ecstatic dance is the center of the new age movement in Puna, but because on Sunday mornings, prior to the drum circle, the Kalani Retreat Center hosts a two hour ecstatic dance session. It’s held in a large auditorium with a wooden floor, a stage at one end and an altar at the other. Normally, there’s just a DJ, but during our visit in January, 2017, we were lucky to hear not just a DJ, but live musicians jamming along. A horn, drums, bass and lead guitar added a tremendous amount of texture and vibrancy to the scene. We learned on Koh Phangang, at the Half-Moon party, how much a drummer or guitarist helps bridge the gap between the distance of electronic music and human reception. 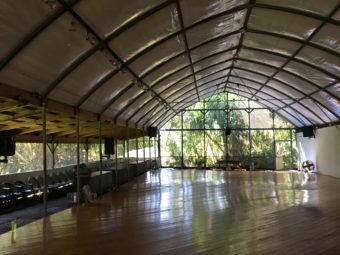 Why the packed floor at Kalani is the center isn’t because of the dance, and not because of the sharing circle that follows, but because of the community sharing at the end. Individuals stand up, share their particular skill or offering, and in some cases needs, such as for housing or help at an upcoming music festival. That alone helps connect the community.

If you want to learn about what’s going on, or if you want to practice something, that’s an excellent place to start. And, of course, there’s a healthy share board on the grounds.

Beyond the Sunday circle, Kalani offers yoga retreats and classes. It isn’t, of course, the only retreat center in the area. The Rainforest Retreat offers accommodations and rental for individuals or groups seeking a place to explore, meditate or play. There’s even a pool on the grounds. We haven’t been, but the pictures make it look very comfortable. And we must mention the Lotus Dream Retreat, a relatively new center, which a couple friends of New Age Towns helped build.

A Bit About Hitchhikers

To continue our reverse-chronological review, we learned about the dancing, as well as the drum circle, from a hitchhiker. On the mainland, we wouldn’t pick up a hitchhiker unless we already knew the person. However, for some reason, on The Big Island it seemed normal and we did it four times.

Our first hitchhiker we picked up just outside of in Hilo on our way to Kona. It was 45 minutes of a little body odor from a long day’s work and some informative and very pleasant conversation. He clued us into Seiji’s Sushi in Kona, which we visited twice, and gave us the skinny on the ecstatic dance and drum circle. We’re thankful for the information and for his company. On the way to Kehena Beach, HI

Hitchhikers 2-4 all happened the day of the dance and drumming. Our second pickup was a French couple in the area for woofing. WOOF stands for Worker On Organic Farms, or something close to that. Usually, the farm provides lodging and some food, and, if any, a negligible salary. These two were young, friendly, and just happened to live right near Kalani, and were interested in the dancing. So we went. And we all spun and danced in our own little spaces. Another welcome experience.

Number three was a short trip. Because of the rain after the drum circle, some walkers stuck their thumbs out. And we obliged for the two minute jaunt back Kalani. It was at that point we decided to get a drink at the other end of the road. We pulled a U and picked up number four.

Number four is the one that soured us. Part of the reason is because we weren’t experienced with hitchhiker identification. This fellow was also leaving the drum circle. The drum circle, however, brings in a variety of folks. Some come to dance and bang, some to enjoy the freedom and the surf, and  some just to commune. But then there are those who partake of substances a little more than others. And that’s what we found. He was harmless, but was more than willing to ask for money and food.

Three out of four is pretty good, and the next time we’re in Hawaii, we’ll be open to sharing our car again.