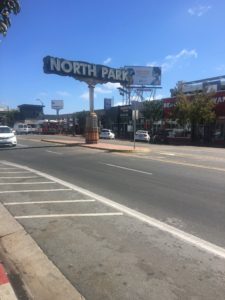 I arrived in North Park just before lunch. My first choice for food was Cafe Calabria. It’s highly rated on Yelp and looked nice inside. Unfortunately, I had made the drive with a very un-new age diet coke, and due to an issue with restroom occupation (someone was camped inside) I skipped over to City Tacos, right around the corner.

City Tacos is a small shop with a counter, a few tables inside and a few on the sidewalk. I ordered one Mahi Adobo and one Pollo Asado, sat at the community table and made some light conversation about the beach feel of the place. It did have a relaxed vibe that would fit in Austin or Encinitas. The food was good but not spectacular. The mahi was dry, and whatever they did removed all of the whitefish flakiness. But the chicken was tasty and both were reasonably sized. All in all, it was nicely priced nourishment in a relaxed place with friendly service.

From there I wandered down University, past a couple coffee shops and at least three tattoo parlors. If you want tattoos, you’ll have plenty of options in North Park. It might just be the Southern California mecca for tattoo artists. But that’s unverified.

Because I didn’t have a new age map and hadn’t done my research, I almost passed The Controversial Bookstore.

My first reaction was that ‘Controversial’ was all about marketing, particularly given its location. In North Park, about the only controversial content would be a wall of Nazi paraphernalia bookended by cardboard cutouts of Osama Bin Laden. However, there is more to the name than just marketing. The store is over fifty years old and has had the same name since the beginning, back before controversy was mainstream and played out on social media.

Since then, the store has morphed into a nice little new age store. Beyond the books on Wicca and chakras, they offer psychic readings and energy healing.

So I ordered up a 45 minute reiki treatment. Good call by me.

I headed to the back and lay down on the table, while Jazmine, the therapist, put on some music. It was a no-touch session except for the stones. She set a variety of stones and crystals on my chakras and couple of smooth chunks of selenite in my open palms. Reiki sessions are personal, but the stones in the palms and the weight on my chakras increased my relaxation. There was some laughter creeping through the thin door, but a few minutes into the session and I was off in my own world. I left completely relaxed, ‘a new man’ as I was told by the resident psychic.

So that meant it was time for a cold brew coffee and a chocolate chip cookie. I found both at the Subterranean Coffee Boutique. It’s a small shop tucked down 30th street with a cool vibe. I liked it. While there, I decided needed some yoga. So I found a 3:30 class at Corepower Yoga, finished my cookie and headed out.

Corepower is corporate. I don’t have an issue with corporate, although I’m not a fan of a central answering service for the whole country. Also, the sign up process on the iPad was cumbersome, intrusive, and geared towards marketing. Not only did it not work well, but giving my name, address, phone number, e-mail, how I heard about the place and what other activities I enjoyed like felt too much like an LA Fitness and not enough like a yoga studio. Frustration ran high. Finally, with the system seeming to cycle back to my password, without accepting it, Whitney stepped in and registered me with a minimal amount of information and hassle. It was service, rather than selfish marketing, and much appreciated.

Corporate or not, the yoga was good. I did Corepower 1.5 in a bright room with high ceilings and large mirrors. My check-in savior Whitney was my instructor and she was good. She was all about the students. Some instructors will go through the routine, talking while they move, making teaching a way for them to get in some yoga while getting paid. Not Whitney. She talked through it, walked around the room, making gently adjustments and demonstrating poses when necessary. The class was challenging and the room heated. I soaked through my clothes, my mat and parts of my towel. Thank goodness they had a shower. Too bad I hadn’t brought a full change of clothes.

If I get settled somewhere, there’s a good chance I’d suck up the gym-like sign up process and join.

I had worn jeans in, holding my board shorts and mat but not an extra t-shirt. So I showered, put on my jeans, wrapped myself in my small beach towel, that was now completely wet, and headed out.

Vagabonds such as I are used to changing in the street, and a t-shirt change was nothing. I had a few in the car.

All in all, a good day. I resisted the momentary urge for a tattoo, had a nice cold brew (coffee), a good workout and a refreshing Reiki energy boost.