There are three Zen centers in the areas surrounding Idyllwild. Each is different with its own feel and purpose. We took a random Wednesday to visit them, uninvited of course. 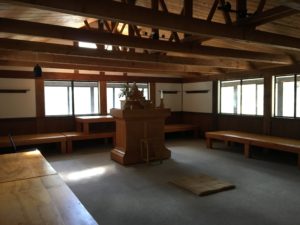 The Yokoji-Zen Mountain Center (ZMC) is an accredited Zen training facility with a western feel. It’s facilities are well kept and relaxed and the meditation room is simple and clean.

Located on the eastern side of the mountain, but still over 4000 feet, the landscape is a mix. More arid than the western face, scrub grass mixes with scattered pines.

If you’re in the area, you’re welcome to stop by and check it out. I did a walk around with a couple of happy yellow labs as my guides and was invited to join the informal afternoon sit. Unfortunately, I had a yoga class to attend back in town so I stretched instead. 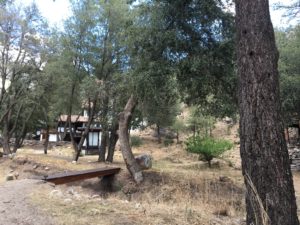 The ZMC offers daily meditation practice as well as periodic silent meditation retreats. Check their web-site for a list of offerings.

The center is also available for rent, and meals can be included. A number of San Diego and Los Angeles based yoga organizations hold retreats at the center. Pilgrimage of the Heart Yoga in North Park recently (October, 2016) held one.

The Karma Mahasiddha Ling (aka Idyllwild Dharma Center) offers public meditation as well as weekend workshops. The center is small and not residential. It’s got more of a neighborhood feel. This center is located in Pine Cove, a five minute drive north from downtown Idyllwild on 243. This is noteworthy because Pine Cove is at 6000 feet and the extra 1000 matters in winter. It’s not just the 3.5 degree temperature change per thousand feet of elevation gain, but Pine Cove tends to get more snow as well. Check the winter schedule before planning to visit. 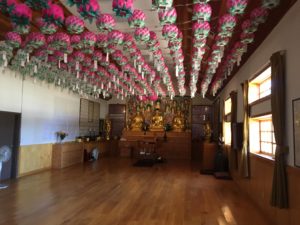 The Diamond Zen Center is located 15 miles north of Idyllwild, down the hill towards Banning. It’s a large center with less of an online presence. The surroundings are more desert than alpine, but it’s not far. 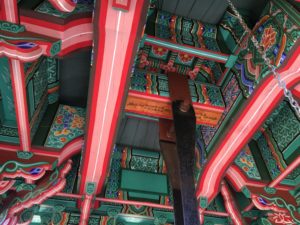 One distinction about the Diamond Center is that it has a very strong Korean influence. The documents are in Korean as is the signage.

The Diamond dogs were scruffier and more standoffish than the labs at ZMC, and the place appeared deserted, but it clearly was not. The interior of the kitchen area and the meditation room were both well kept. And the ceiling of the bell tower was pretty cool just by itself.